Intellect is more Powerful than Strength 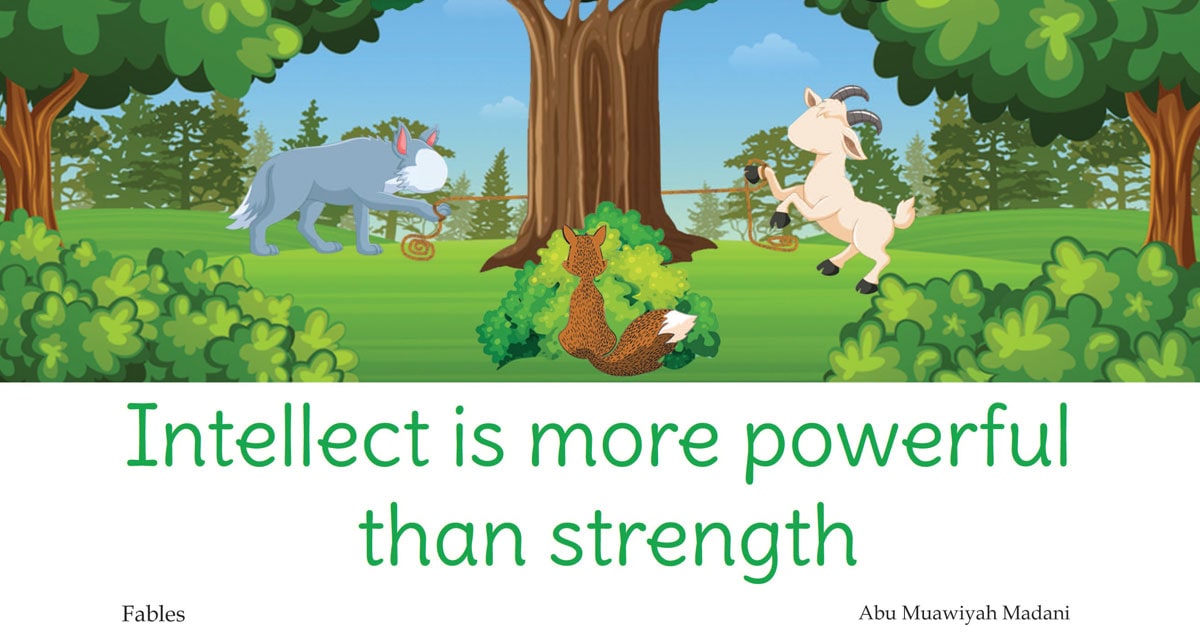 ‘Salaam brother! How are you? Look at the weather. How pleasant it is! Let’s play.’

‘Go away from here, I have no time for little children like you.’ Shairu ‘billy goat’ said while scolding Tinku ‘fox’.

After being scolded by Shairu, Tinku was going along the side of the lake. Suddenly, he saw Bijli ‘Wolf’ on the other side [of the lake] taking bath joyfully with his pups.

‘Bijli! Bijli! Should I come too?’ Tinku called [the wolf] to seek permission.

‘Have you called me?’ Bijli replied in anger.

Tinku replied immediately, ‘Yes! I have called just you’.

‘There is no comparison between you and me as I am strong and you are weak! Go away, play with a weak one like you’. After saying this, Bijli ‘wolf’ again started playing with his pups.

The words of Bijli and Shairu greatly upset poor Tinku, then an idea came into Tinku’s mind. He intended firmly to teach a lesson to both Shairu ‘billy goat’ and Bijli ‘wolf’.

‘It was a good joke’. Bijli replied while turning its face.

‘I am not kidding; let’s compete or are you afraid of losing?’ said Tinku.

‘I am not afraid of you. Ok, if you are so much interested in losing, then let’s compete. I will meet you here’. Bijli, while laughing, accepted the challenge.

After Bijli, Tinku reached Shairu and said to him, ‘You think that you are very strong and I am small and weak. Now I will tell you who is stronger between us.’

‘How will you prove it, tiny?’ Shairu made fun of Tinku.

‘By beating you in the game of tug-of-war’. Tinku replied with confidence.

Having seen the acceptance of Shairu, Tinku said handing over the end of the rope to Shairu which he [Tinku] was holding, ‘Let’s start the game.’

‘Ok! But remember! If you lose, you will not disturb me again.’ Shairu said while holding the end of the rope.

‘Ok! Ok! When I say then pull the rope.’ Tinku said while running towards trees.

Shairu started pulling the rope smilingly, but when the rope from the other side got pulled hard too, his smile vanished.

From the other side, Bijli was making hard efforts to pull the rope too. Bijli murmured, ‘This Tinku is very strong’.

Due to trees in the middle, neither of them (Shairu and Bijli) could see each other, therefore both thought that they were competing against Tinku.

Both suffered from short of breath due to making continuous efforts, but neither of them could succeed in pulling full rope towards themselves. Tinku, hiding himself in the bush, burst into laughter by watching their terrible condition.

Getting tired, both left the rope and started panting, sitting on the ground. Seeing the condition of both of them, Tinku picked up his rope and went home jumping with joy. On the other hand, Shairu and Bijli both were thinking, how tiny Tinku defeated them.

Dear children! Intellect is a great and beautiful blessing from Allah Almighty. By using it, we can also beat physical strength. But dear children! One should always use his intellect for good deeds such as helping the weak and solving their problems.

Sparky went closer to where the voice came from but didn’t see anyone nearby. Who was calling out for help?

Three families of birds lived on a tree. Their homes were at different parts of the tree, some higher, some lower.

‘No, my child, no! The morning began a while ago. Something must be wrong, which is why there is darkness in our home.

‘Ah, what am I supposed to say! I have become fed up with people. They do not treat me well’,

Whilst humming to himself, the brown monkey put the fruit in a basket and was returning back to his home.

‘Why is my big friend looking so sad? Are you stressed about something?’ asked the Little Monkey, coming down from a tree.

‘What have you done? They were my children,’ cried Omera the Owl, shaking her wings in a chaotic flutter,

A short while later, both white dogs were at the house of their neighbours.

In the jungle, animals usually live with their own kind. But this jungle was very different.

Elia the Ewe and Emad the Elephant were very good friends.
Read Article
One day, Safri was having lunch. In the meanwhile, Khabri came running and informed him:
Read Article