Wisdom and Manners of Zakah

In this Ayah, Almighty Allah has mentioned Zakah right after Salah – a clear sign of religion. In a blessed Hadees, Zakah has been declared to be one of the foundations of Islam. It is Fard for every Nisab-possessing Muslim to pay Zakah. Not paying it is Haraam and a major sin. Delay in paying it without Shari’ah-granted permission is also a sin.

When a bondman recites the Kalimah, he testifies to monotheism which means only Allah عَزَّوَجَلَّ is worthy to be worshipped. And, monotheism requires that a monotheist loves none other than the Only Being that he worships. Love cannot be divided. In other words, one cannot love two persons to the same degree. Instead, one can have perfect love only for one person. And, perfect love can be tested when compared with other types of love. For instance, one can test his love for his Lord by pondering whether he has a passion to sacrifice his favourite thing for this Divine love or not. Obviously, people love their wealth very much. It is the same love for wealth that makes them abandon their friends and even relatives. Then this love for wealth leads them to indulge in love for the world and to develop hatred for death. Therefore, a bondman has been commanded to sacrifice his beloved wealth in love for Allah the Real Mahboob so that the truthfulness of the claim of the bondman’s love for the Almighty can be verified. Similar is the example of Jihad in which one is put to the test when it comes to sacrificing one’s beloved life. Regarding wealth, some beloved bondmen of Almighty Allah stated: ‘As per the commandment of Shari’ah, 2.5 percent Zakah is Fard for ordinary people but for us, it is Wajib to spend our entire wealth.’(Ihya-ul-‘Uloom, vol. 1, pp. 288)

Second wisdom of Zakah ‘getting rid of miserliness’

Miserliness is a trait that brings ruin. The Greatest and Noblest Prophet صَلَّى اللّٰهُ عَلَيْهِ وَاٰلِهٖ وَسَلَّم said, ‘There are three things that bring ruin:

(1) The miserliness that is abided by (2) the desire that is obeyed (3) man’s considering himself to be good. (Shu’ab-ul-Iman, vol. 1, pp. 471, Hadees 745) Here is a method of how to get rid of this trait of miserliness. One should develop the habit of spending his wealth. Love for anything can be suppressed by forcing one’s Nafs into giving up the thing to such an extent that this act of giving it up becomes his habit. Zakah means to ‘purify’. This meaning perfectly applies here because Zakah purifies a wealthy person from miserliness – an evil that causes devastation. The perfectly beloved and righteous bondmen of Allah attain so much purity that the more they spend, the happier they get; as is obvious from the blessed action of the Holy Prophet صَلَّى اللّٰهُ عَلَيْهِ وَاٰلِهٖ وَسَلَّم whose blessed face would light up with pleasure when he صَلَّى اللّٰهُ عَلَيْهِ وَاٰلِهٖ وَسَلَّم bestowed upon others.

In fact, Allah Almighty has done His bondman a favour by bestowing wealth upon him. Therefore, spending wealth in the Divine path conforming to the Divine commandment in order to please Almighty Allah is the expression of thankfulness for wealth which is a Divine favour.

Some manners of paying Zakah

1 The Zakah-paying person should keep the above-mentioned wisdoms of Zakah in his mind and should carry out the accountability of his Nafs. For example, he should think like this, ‘Do I give wealth gladly and willingly carrying out the Divine commandment? Is it easy for me to spend wealth in the Divine path, which is a sign of being free from miserliness? Have I recovered from the fatal disease of miserliness by giving Zakah? Do I have the feeling of expressing thanks for the Divinely-bestowed favour when I pay Zakah?’

2 Before the end of the year, i.e. before Zakah becomes Fard, one should pay Zakah showing his fondness for the fulfilment of the Divine commandment. Not only will this gladden the hearts of the Shari’ah-declared destitute people soon but will also rule out the possibility of any hurdle in the payment of Zakah in the future.

3 If there is a risk of show-off or any other spiritual disease, one should pay Zakah secretly.

4 If openly given charity motivates others, one should give it openly and should protect his inner self from show-off.

5 One should not ruin one’s Sadaqah and Zakah by boasting of the favour and hurting the feelings of others. Boasting of favour means mentioning the Sadaqah unnecessarily after giving it; and hurting feelings means taunting Sadaqah-taking person about his poverty or pressurizing him in any other way.

7 Out of his wealth, one should give such wealth which is in excellent condition and which he holds dear and which is Halal, pure and clean. Almighty Allah is Pure and accepts only that which is pure. One should never give anything Haraam because it is totally rejected and it is even a cause of punishment; nor should he give something worthless and useless as Sadaqah because this is contrary to the manners of Sadaqah.

8 For the purpose of giving Sadaqah, one should look for those people through whom Sadaqah will be used in an excellent way. For example, righteous people or Islamic scholars or those who have true love for Almighty Allah; in short, he should give his Sadaqah to those who consider every favour to be a reward from the Almighty. Similarly, he should give Sadaqah to a self-respecting poor person who hides his needs or to a deserving person who has a family to support or anyone who is unable to earn a living due to any disease or any other obstruction or to one’s close relative. Giving it to one’s relative is not only Sadaqah but also kind treatment to the relative, which is an act of great reward. Giving it to religious people will earn him double reward; one reward for Sadaqah and the other for assisting those serving religion.

If one spends his wealth in the Divine path conforming to these manners, he will attain many blessings and mercies. 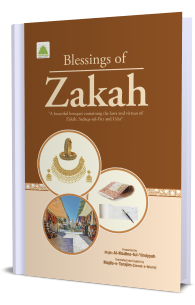