Translation: Indeed those who said, ‘Allah is our Lord’ then remained steadfast in it, the angels descend upon them, (saying), ‘Do not fear and do not grieve, and be happy about the Paradise which you used to be promised’. (Part 24, Surah Ha-Meem As-Sajdah, Ayah 30)

The above Ayah states that those who accepted faith by saying that their Lord is only Allah عَزَّوَجَلَّ and then they remained steadfast in it, so angels descend towards them from Allah عَزَّوَجَلَّ, comforting them and giving them the glad tidings of Paradise.

We would discuss “Steadfastness” in the end. Let’s first give an interpretation of the remaining part of the Ayah for understanding. The Ayah mentions that angels descend towards the steadfast ones. Angels descend in the world as well as at the time of death.

In the world, angels descend and instil calmness, comfort and steadfastness in the hearts of the Muslims. They encourage and hearten them, inspiring great bravery in them against enemies. They advise the Muslims not to fear from the powers of the misguided ones, and nor to grieve at sacrificing their life and wealth in the right path. In the hearts and minds of the Muslims, angels arouse enthusiasm for the Hereafter, love for Paradise, dignity of Divine pleasure and keenness of Divine closeness. The description of angels descending in the world is given in Ayah 12 of Surah Al-Anfaal in the Holy Quran:

Translation: And when O beloved! Your Lord revealed to the angels, ‘I am with you, so keep the believers steadfast; I will soon instil terror into the hearts of the disbelievers, so strike on the necks of the disbelievers and hit them on each and every joint.’ (Part 9, Surah Al-Anfaal, Ayah 12)

Descending of angels in the world is obvious, but not everyone can see them. One blessed with special grace by Allah عَزَّوَجَلَّ can see them. However, when they descend at the time of death, the dying person sees them and hears their voice. At that time, the angels say to him, ‘Do not grieve for the world and the people of the world you are leaving behind. And do not fear from the stages of the afterlife. We are your friends in the world as well as in the Hereafter.’ The angels further say, ‘For you is the glad tidings of Paradise that you used to be promised in the world. And these favours of Paradise are hospitality from the Forgiving and Merciful Lord.’ In this way, the steadfast person leaves the world while hearing the glad tidings of Paradise and comforting conversation from the angles.

To stay steadfast in faith, good deeds and in refraining from sins is called Istiqamah [steadfastness]. In other words, Istiqamah implies that one must not lose his faith; he should not give up pious deeds such as Salah, Sawm, Hajj, Zakah; one should be steadfast in reciting the Holy Quran, making Zikr, Tasbihat, Azkaar, reciting Salat-‘Alan-Nabi, giving Sadaqah and charity and doing the well-wishing of others, etc. One should have an ingrained [i.e. firm] habit of refraining from all sins on a permanent basis. All of these are included in steadfastness. However, ruling on different types of steadfastness will also be different. For example, remaining steadfast in correct beliefs is the biggest Fard. Fulfilling Fard acts permanently is also Fard. Refraining from sins is also obligatory. Performing Mustahab deeds regularly is also a great Mustahab.

Blessed companions such as Sayyiduna Bilal, Abu Zar Ghifari, Sumayyah [سُمَیّہ], ‘Ammar Bin Yaasir, Yaasir and many others رَضِىَ الـلّٰـهُ تَعَالٰی عَـنْهُم had to go through terrifying ordeals but still they remained steadfast in faith. Today, when steadfastness in faith is mentioned, one immediately thinks of those blessed personalities. Here is a very lovely saying of the Holy Nabi صَلَّی اللہُ تَعَالٰی عَلَیْہِ وَاٰلِہٖ وَسَلَّمَ  regarding steadfastness in faith: The person who has three things will find sweetness of faith:

2 One who has affection for any man only for Allah عَزَّوَجَلَّ.

3 One who dislikes indulging in disbelief after he has embraced Islam as much as he dislikes being thrown into fire. (Sahih Bukhari, vol. 1, pp. 17, Hadees 16)

It implies that Fard acts should never be missed. The Holy Quran states about Salah:

Translation: And those who guard their Salah. (Part 18, Surah Al-Mu`minoon, Ayah 9)

It is also stated:

Translation: Those who are always punctual with their Salah.

On one occasion, he صَلَّی اللہُ تَعَالٰی عَلَیْہِ وَاٰلِہٖ وَسَلَّمَ  said to Sayyiduna ‘Abdullah Bin ‘Amr رَضِىَ الـلّٰـهُ تَعَالٰی عَـنْهُ, ‘O ‘Abdullah! You should not be like so-and-so person who used to stand at night (i.e. offer Nafl Salahs) but then he gave up standing at night. (Sahih Muslim, pp. 452, Hadees 2733)

Regarding steadfastness in Mustahab acts, the Holy Nabi صَلَّی اللہُ تَعَالٰی عَلَیْہِ وَاٰلِہٖ وَسَلَّمَ  said, ‘The deed liked the most in the court of Allah عَزَّوَجَلَّ is the one performed steadfastly even if it is in small quantity.’ (Sahih Bukhari, vol. 4, pp. 237, Hadees 6464)

We often hear and read the word “Istiqamah [steadfastness]” but we should also ponder about our own condition whether we are steadfast in performing good deeds and in refraining from bad ones or not. Overcome with temporary emotions, we start offering Nafl Salahs, reciting the Holy Quran as well as Salat-‘Alan-Nabi, making Zikr, delivering Dars and studying Islamic books but our enthusiasm disappears within a few days, resulting in us giving up these deeds. Similarly, in the month of Ramadan or during a pious Ijtima’ or at the time of becoming disciple, we make a firm intention to give up sins and, for a few days, we manage to protect ourselves from sins eagerly and enthusiastically but then we relapse into our old habits of sins after only a few days. In fact, we end up drowning in the mire of sins from head to toe. In order to develop the mindset of steadfastness in good intentions and to remain steadfast, the most beneficial and important factors are willpower and courage that should never be lost. Keep this basic point in your mind. You will be blessed with steadfastness, اِنْ شَــآءَ الـلّٰـه عَزَّوَجَلَّ.

(Read about the methods of gaining steadfastness in the next article.) 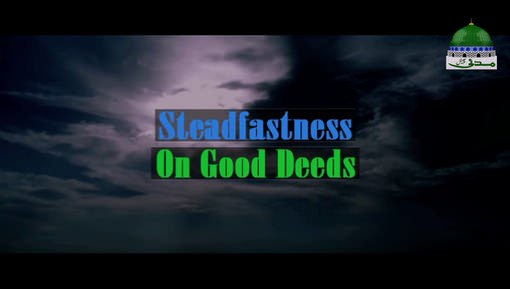