Mother! I Want To See The Pictures 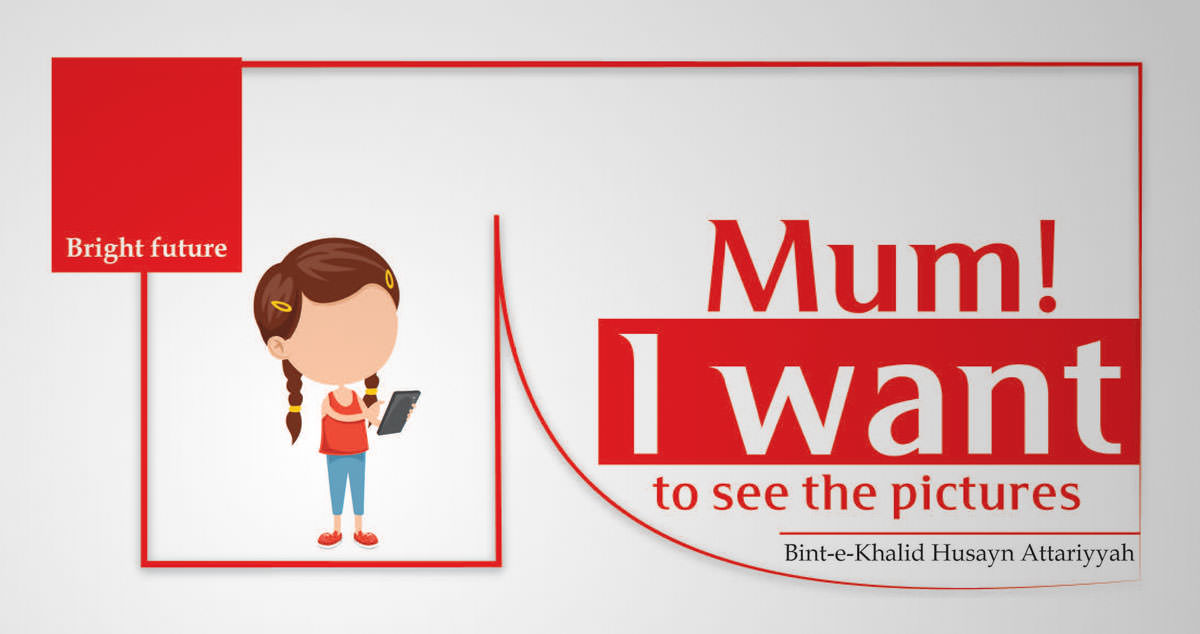 Mum! I want to see the pictures

‘Mother! Mother! Give me the mobile phone! I want to see the pictures’, said Umamah as she woke up in the morning. But her mother politely refused and said, ‘My daughter will eat breakfast first, then she will get the phone.’

‘No mother! I need it now!’ said Umamah as she began to cry and displayed stubbornness in her demand for the phone. Frustrated, her mother handed her the phone, which Umamah took and then sat in a corner.

This has become a daily routine; the five-year-old Umamah spends most of her time on the phone, begins to cry when it is taken off her and she does not understand when she is talked to. Umamah’s mother would be very upset, frustrated and even scold her, but Umamah had developed such a habit that she would not stop until she got hold of the phone. Her mother was very concerned because Umamah would not eat breakfast properly, nor would she eat her food properly.

For the last two or three days, Umamah had started to experience headaches every night. Initially, her mother would massage her head and put her to sleep, but when Umamah’s father saw that her pain was increasing, he took her to the doctor. After doing a check-up, the doctor said that her eyesight had become weak and she must wear glasses, and that she must stay away from phones (tablets and laptops). As soon as they arrived home, Umamah began to cry for the phone again.

Umamah’s father explained to her, ‘Daughter! The doctor has prohibited you from using the phone.’ However, Umamah remained stubborn.

Umamah’s father mentioned this situation to an Islamic scholar who was a friend of his and asked if his daughter has any ill effects of magic on her. So, he recited some blessed words and blew on the girl and then after making Du’a, he explained, ‘There is no issue with the girl, it is only the excessive usage of the phone that has caused harm. Not only is the excessive usage of the phone physically detrimental, but it also affects people mentally and psychologically. This is why your daughter is becoming stubborn and quarrelsome. Therefore, put an end to this habit, however, it will not come to an end quickly. The best way of ending this habit of using the phone is to provide a good alternative to your daughter. Make her watch the children’s shows that come on Kids Madani Channel, and alongside this, incline her towards drawing and painting. These habits have a positive effect on children and strengthen the muscles of the hands and the arm also. In other words, they are a very beneficial form of exercise.’ Umamah’s father thanked his friend who was an Islamic scholar.

Did you see children! Not only did the usage of the phone become a cause of concern for Umamah, but it led to her parents being troubled also. Besides experiencing physical pain, it caused her psychological issues also. From this, we learn that using something beyond necessity is harmful. Young children and adults should both adopt restraint whenever possible and avoid those things which their parents instruct them not to use.

May Allah Almighty grant us the Taufeeq to utilise everything in a permissible manner.

12 years old Owais had come to meet his maternal aunt and see her new house along with his mom. After drinking water etc.,
Read Article