After coming from school, as usual, Khubayb greeted his mother with Salaam and requested: Dear Mom: ‘I am feeling very hungry today; please give me food quickly’. Mother said: ‘Alright dear son! Change uniform and freshen yourself up; meanwhile, I lay dinning-mat for you’. After freshening up, Khubayb sat on the dining-mat saying: ‘May there be my favourite food item today.’ While passing the food forward, Mother said: Khubayb! ‘It seems, you did not eat breakfast properly.’ As soon as Khubayb looked at curry, his face expression changed and he said: ‘Mom!  Make something else for me.’ You know that I do not like to eat bottle gourd.’ Upon seeing his sad face, mother instantly said: 'Well, I make an omelette for you.'

The moment uncle finished this beautiful parable, Khubayb said immediately: ‘It means that we should also like to eat bottle gourd.’ Uncle said: ‘Great! You are incredibly intelligent indeed.’ Khubayb said sadly: ‘Dear Uncle! Today I have missed a big chance. Haven’t I? I was served with bottle gourd at noon but I didn’t eat it.’ In order to change Khubayb’s mood, Uncle said, ‘Should I add another fact in your knowledge?’ Khubayb said happily, ‘Of course, dear uncle.’ Uncle said: ‘Now you have learnt that using bottle gourd is a Sunnah of the blessed Prophet صَلَّى اللّٰهُ عَلَيْهِ وَاٰلِهٖ وَسَلَّم; besides, medical science has also described numerous beneficial features of it.’ Surprised, Khubayb said, ‘What are these benefits?’ Uncle said: ‘Nutrients found in bottle gourd naturally have cool effectiveness. In addition to reduce the heat impact, these nutrients also reduce fatigue. Then Uncle said: Well dear Khubayb! For more detail about the benefits of bottle gourd, read the edition of Monthly Magazine Faizan-e-Madinah, published in Rabi’-ul-Aakhir 1438.’ Khubayb expressed his resolve by saying:  اِنْ شَــآءَالـلّٰـه. 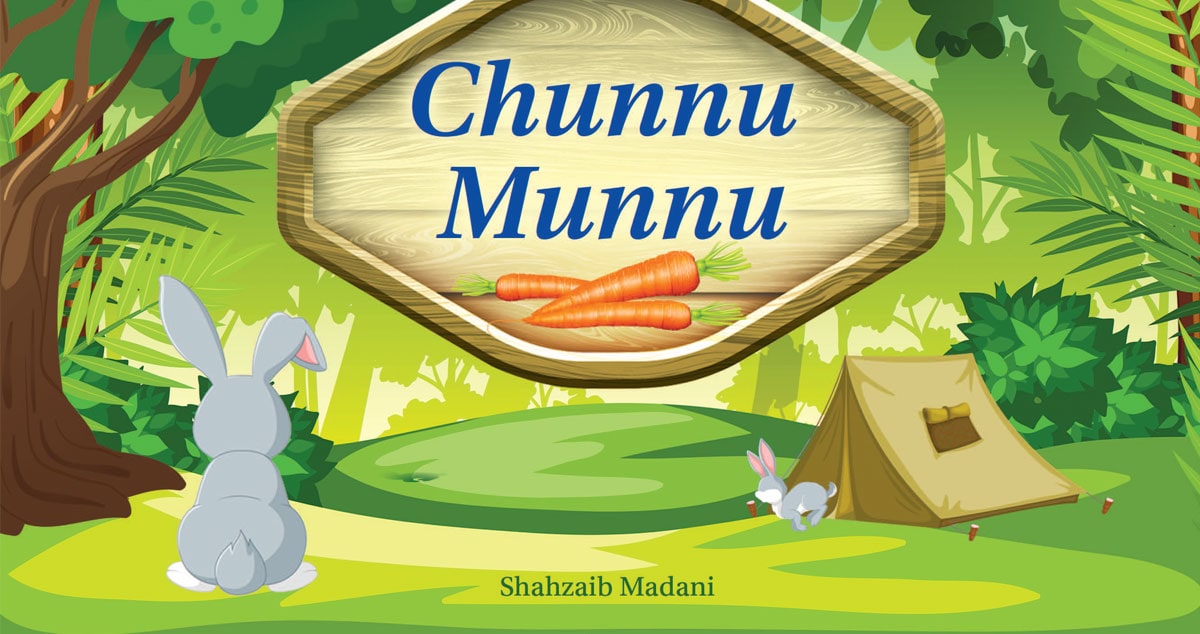 ‘Who has thrown litter in front of my house?’ While Chunnu and Munnu, the two small rabbits, were hopping around their burrow, they heard Momo goat bleating angrily. Having listened to the bleating, Chunnu asked Munnu, ‘Is it your mischief?’ Munnu laughed and ran outside.

Despite being cousins, they loved each other like brothers. Both of them looked alike but Chunnu was older and ‘simple and decent’, whereas Munnu was just opposite of his cousin. He (Munnu) would remain engaged in causing mischiefs all the time. Sometimes he would steal rice from the nest of aunt sparrow and sometimes hide the eggs of aunt duck and then he would escape every time, portraying Chunnu to be the committer of his mischiefs.

Once the chief of rabbits came to stay in the jungle. In the early morning, when all small rabbits went to greet the leader, Munnu also accompanied them. After reaching the burrow of the chief, all the rabbits started listening to the pieces of good advice carefully, delivered by the ‘chief rabbit’ but Munnu began to look around. Meanwhile, his gaze fell on a basket placed in the corner containing red carrots and green cauliflower leaves. Munnu wanted to gulp the mouth-watering food items but he was also scared of the chief. By the time greeting came to an end, Munnu had prepared a plan in his mind.

Now Munnu was eagerly waiting for the evening. As darkness fell, Munnu stealthily went out of the burrow, without the family knowing about it. Standing at window, Chunnu spotted Munnu sneaking out like a thief, he started following him quietly. Chunnu sensed that Munnu was in a mood of making another mischief, so he thought to prevent him.

After a while of walking, Munnu reached the chief’s burrow. Escaping guards’ notice, Munnu managed to enter the burrow from behind. As he entered the burrow, he moved straight towards the food basket and started to eat a nice carrot. No sooner did he eat half of it, at once the ‘chief rabbit’ entered the burrow. Frightened, Munnu jumped out running as though he came across a ghost. Outside, hidden in bushes nearby, Chunnu was watching all that happening. Running, as Munnu approached the bush in which Chunnu was hiding, he [Chunnu] called him to come in. Munnu got relaxed upon seeing his cousin over there.

The chief’s guards were patrolling outside searching for the thief. Observing the critical situation, Munnu said to Chunnu, 'You are elder, brother Chunnu. Go out and look around if there is any way to escape.' Munnu knew, ‘if Chunnu goes out, the guards will arrest him. Thus he will remain safe.’

Believing Munnu’s words, as soon as the naive Chunnu came out of the bushes, the guards arrested him and took him in the court of the chief as a thief. The chief ordered: ‘Put him in the prison.’ Chunnu was deeply shocked to hear this punishment. Now he realised why he would be punished for all the mischiefs committed by Munnu. He said immediately: ‘O honourable chief! Kindly listen to my one request before punishing me. In fact, I am not a thief but rather this is my cousin, ‘Munnu’, who did this act. He closely resembles me and he is still hiding in such and such a bush.

The ‘chief rabbit’ believed Chunnu’s words and ordered the guards to let Chunnu go and arrest Munnu instead. So, Munnu got punished for his mischief.

Dear children! The one who causes harm to others gets himself into trouble one day. 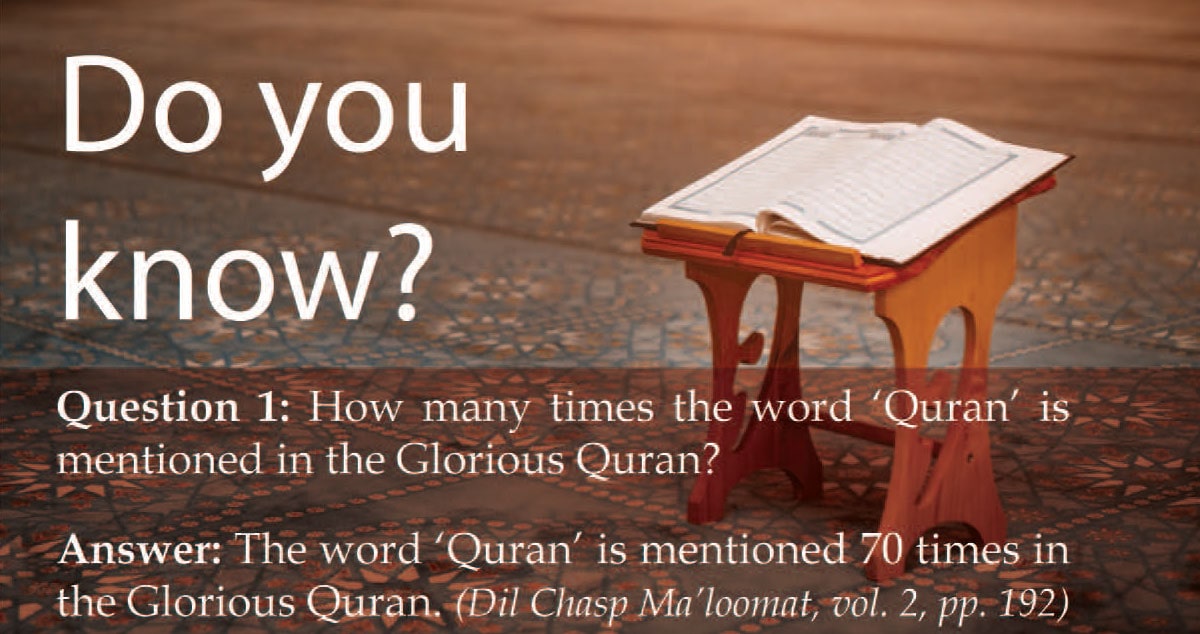 Question 1: How many times the word ‘Quran’ is mentioned in the Glorious Quran?

Question 3:  In blessed Hadees, which blessed Ayah has been called the chief Ayah of all Ayahs?

Question 4: How many times the blessed name of our Beloved Rasool صَلَّى اللّٰهُ عَلَيْهِ وَاٰلِهٖ وَسَلَّم is mentioned in the Glorious Quran?

Question 5: Which Surah mentions the occasion when Jinns listened to the Glorious Quran from the Holy Prophet صَلَّى اللّٰهُ عَلَيْهِ وَاٰلِهٖ وَسَلَّم?

Question 6: For which blessed Prophet, fire became cool and peaceful?

Question 7: In the hand of which blessed Prophet, iron would become soft?