The Book of Life

“The Muslims are brothers ˹to each other˺.”[1]

Our beloved Prophet صَلَّى الـلّٰـهُ عَلَيْهِ وَاٰلِهٖ وَسَلَّم advised Muslims to forge loving relationships with one another. He declared:

“I swear by He under whose control is my soul, you will not enter Paradise until you believe, and you will not become ˹perfect˺ believers until you love one another.”[2]

In life, we receive bouquets of love from those around us, and their scent fragrances our lives. As flowers are not without thorns, the thorns of animosity also find their way into our lives, wounding our hearts and creating rifts between us and others. Whether at home, work, school, college, madrasa, or Islamic seminary, our lives flourish when we show love to one another, and flounder when hatred rears its head. Humans naturally gravitate towards love and affection and away from hatred. We should seek to increase this love amongst us and uproot hatred as much as possible.

Sincere, brotherly love cannot be hidden. Our behaviour, body language, cheerfulness, support—or lack of— and consistent company of someone expose whether we love or hate our brother in Islam. If we find a Muslim who loves us, we should pray for this love to be protected and for it to blossom even more. God forbid, if someone shows hatred towards us, we should introspectively consider why they hate us and what led to this.

Causes that lead to hatred

Just as love does not come about from nothing, hatred also has causes, two of which we shall discuss here.

Jealousy, arrogance, and hostility can engender hatred, but we cannot categorically figure out whether internal or external causes have caused a person to hate us until they admit it. Without convincing evidence, it is unfair for us to speculate and accuse someone of jealousy or arrogance. If you feel someone hates you due to internal causes, pray to Allah to change their hatred into love.

Our weaknesses, shortcomings, or bad conduct can cause others to despise us. Think to yourself:

1.   Have I ever falsely blamed them for something?

3.   Have I ever degraded them in front of others for a minor mistake?

4.  Have I physically hurt them?

5.   Did they come to know of what evil words I used for them behind their back?

7.   Did I fail to come to their aid when they needed me despite being able to help?

8.   When taking a loan, did I make weak excuses when they asked for me to repay it?

9.   Did I borrow something from them, use it to the point of disrepair, and return it to them without even offering an apology?

10.   Did I offer them false hopes in their time of need and then disappear?

11.   Did I aggressively criticise them?

13.   Did I ignore their arrival by deliberately remaining busy on the phone, etc?

16.   Did I interfere in their business or meddle in their plans of marriage?

17.   Did I never praise them for any good, whilst always pointing out every mistake they made?

18.   Did I ever break their heart by being harsh with them?

19.   Did I stop speaking with them when I no longer needed them?

20.   When speaking, did I constantly interrupt them?

21.   Did I taunt them about their failures?

22.   Did I degrade them by declaring something to do with them as inferior and lowly?

How to uproot hatred

Enemies can become friends through good character and hatred can transform into love with the permission of Allah. Here are some tips.

Prayer is the weapon of the believer. This should be the first port of call when addressing any issue, and it can be the red sulphur for transforming hatred into love.

“Dear Allah, grant me your love and the love of those whose love will benefit me before You. Dear Allah, whatever you have nourished me with from what I love, make it strength for me for that which You love. O Allah, whatever you have withheld from what I love, keep me unworried concerning it and keep me busy in that which You love.”[3]

Spread peace and love by greeting all Muslims with salam whether you know them or not. The final Prophet صَلَّى الـلّٰـهُ عَلَيْهِ وَاٰلِهٖ وَسَلَّم said, “Shall I not inform you of something that will bring about love amongst you if you were to act upon it? Make salam commonplace amongst yourselves.”[4]

Give suitable gifts to your fellow believer according to your financial means and the scenario at hand. Gifting to one another brings about love, as mentioned by the final Prophet  صَلَّى الـلّٰـهُ عَلَيْهِ وَاٰلِهٖ وَسَلَّم :

“Gift to one another, love will increase mutually.”[5]

4. Support them in their time of need

The Messenger of Allah صَلَّى الـلّٰـهُ عَلَيْهِ وَاٰلِهٖ وَسَلَّم said: “The example of the friendship, mercy, and compassion displayed by Muslims towards one another is like a body. When any part of the body is afflicted with illness, the entire body is then affected with fever and sleeplessness.”[6]

Forgiveness calms the turbulent storms of hatred. If someone is upset because of something you did, apologise and seek their forgiveness. The final Prophet صَلَّى الـلّٰـهُ عَلَيْهِ وَاٰلِهٖ وَسَلَّم said:

Whoever has wronged another person in regards to his reputation or something else, he should seek forgiveness from him before the Day in which there will neither be dirham nor dinar. If he has virtuous deeds, they will be taken from him according to the amount of oppression which he has done, and if he has no good deeds, the sins of the oppressed person will be loaded on him according to the level of oppression.[7]

Disagreements and disputes are expected among family and friends. When tensions do arise, be the first to reconcile. You have nothing to lose and everything to gain. The final Prophet صَلَّى الـلّٰـهُ عَلَيْهِ وَاٰلِهٖ وَسَلَّم said:

“It is not permissible for a Muslim to cut ties with his brother ˹in faith˺ for more than three days. The quickest to reconcile will be the quickest to Paradise.”[8]

7. Respecting elders and being kind to the young

Many doors of hatred can be sealed shut if we respect elders and show tender kindness to the young. The master of Madinah, the Messenger of Allah صَلَّى الـلّٰـهُ عَلَيْهِ وَاٰلِهٖ وَسَلَّم said, “Whoever is not merciful to our young ones or does not acknowledge the rights of our elders, is not from us.”[9]

Tenderness beautifies a person. It also bring about love in the hearts of others. The Messenger of Allah صَلَّى الـلّٰـهُ عَلَيْهِ وَاٰلِهٖ وَسَلَّم said, “Gentleness beautifies anything in which it is found.”[10]

Humbleness does not degrade a person but uplifts them. The final Prophet صَلَّى الـلّٰـهُ عَلَيْهِ وَاٰلِهٖ وَسَلَّم explained:

“Whoever is humble for Allah’s sake, he is granted high ranks by Him.”[11]

10. Decorum out of respect for other Muslims

Respect and dignify other Muslims, adopting the highest level of decorum. You will be respected as much as you respect others.

We all know the adage, “The way to a man’s heart is through his stomach.” Bear in mind, feeding Muslims is an act of great reward. Feed your Muslim brothers with good intentions, and you will find a place in their heart.

12. Visit them during illness and console them upon a bereavement

People never forget if you were there for them during testing times. You will find great reward and a place in every heart if you visit others during illness or support them when someone passes away. The final Prophet صَلَّى الـلّٰـهُ عَلَيْهِ وَاٰلِهٖ وَسَلَّم said: “If a Muslim visits another sick Muslim in the morning, then until the evening, or if he visits in the evening, then until the morning, 70,000 angels seek forgiveness for him, and he shall have a garden in Paradise.”[12]

Allah will dress he who consoles a saddened person with the garb of taqwa, and He shall have mercy upon his soul from all others. Whoever consoles a person afflicted with calamity, Allah will have him wear the attire of Paradise, the price of which cannot be matched even by the (entire) world.[13]

There are many other virtuous acts that can win hearts and foster love among people. When love enters the heart, hatred is automatically uprooted. Our job is to try our best, and success is given by Allah Almighty.

May Allah allow the Muslims to love one another for His sake.

In life, we receive bouquets of love from those around us, and their scent fragrances our lives.

Once, Sayyiduna Isa عَـلَيْـهِ الـسَّـلَام was sitting when he saw an old man digging the ground.

Impressions have a great importance in our social and religious affairs.
Read Article

In the winter of January 2020, a gas heater caused a house to set on fire.
Read Article

After a long time, a person went to visit his teacher and began to say, ‘Whichever work I put my hand to, it results in failure.
Read Article

Many monkeys used to live around a mountain village.
Read Article

These were the last days of the month when Salman entered his home.
Read Article

A cunning and crafty wealthy man went to a farmer in a village and offered him a partnership. As per the partnership, the wealthy man
Read Article

The honourable teacher drew a line on whiteboard and asked students: Is there anybody who can shorten this line without touching and erasing it?
Read Article

Having taught a lesson, teacher said to his students: Let me tell you a fictional story followed by the characters involved in it.
Read Article 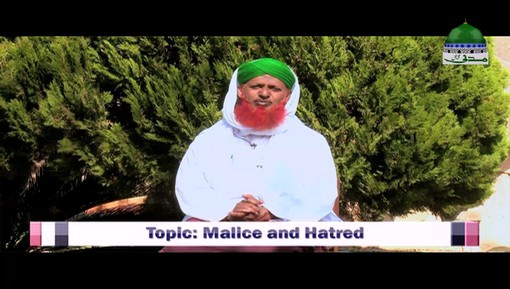