Is Only Serving Mankind Called Islam 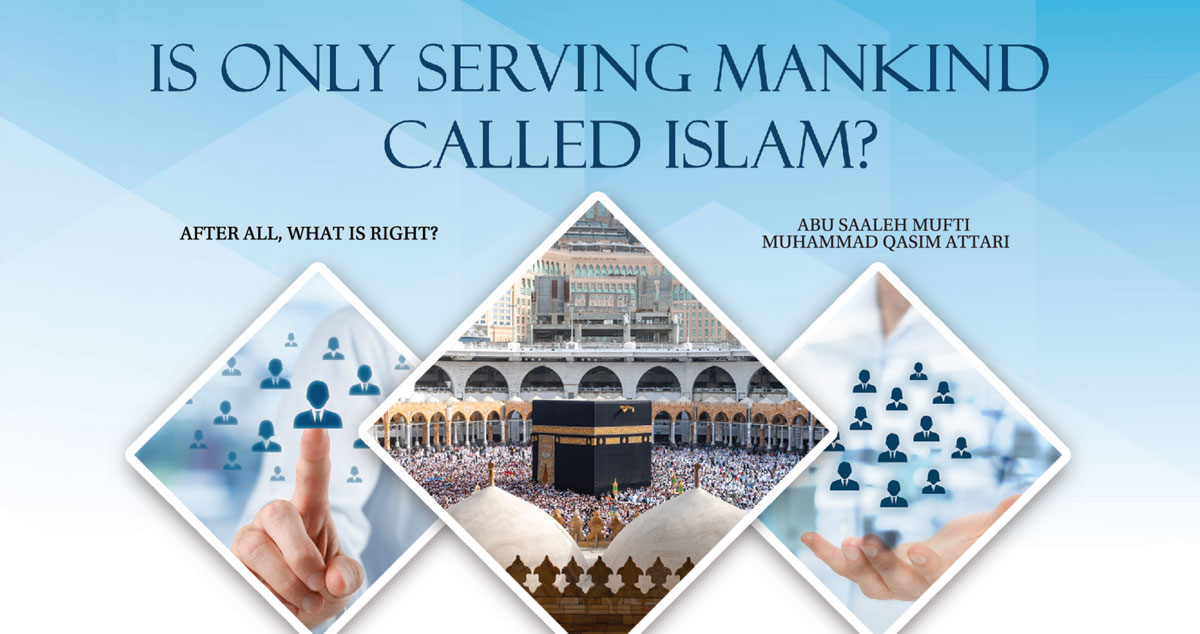 Nowadays it is a common practice to become dishonest regarding using words. Good words are being spoken for a bad purpose such as those who do not like Islamic education speak the word, ‘Roshan Khayali’ (enlightenment) by considering the teachings of the Holy Quran and blessed Hadees to be ‘darkness’ and anti-Islamic manners to be ‘a light’ which is absolutely wrong.

The same is with this sentence, ‘Islam is the name of only serving mankind’. Basically, ‘serving mankind’ is a very nice and great act and it has great importance and excellence in Islam. To do good to people, help the poor, be affectionate towards orphans, fulfil the needs of the afflicted and remove the worries of the people are the great Sunnahs of the Beloved Rasool صَلَّی اللہُ تَعَالٰی عَلَیْہِ وَاٰلِہٖ وَسَلَّمَ . This great act has been highly emphasized in the Holy Quran, but the people who lack Islamic knowledge are heedless of worship and distort Islamic teachings use this sentence for the purpose that only ‘serving mankind’ is necessary and the rest of the acts of worship of Islam such as Salah, Sawm, Hajj and ‘Umrah, recitation and Zikr and pondering over the Hereafter are not very important. Such people usually use the word ‘human rights’ abundantly, whereas about worship they say, ‘It is the matter between a bondman and Allah Almighty. If Allah Almighty wills, He will forgive. Therefore there is no need to worry about them and nor do we need to call them towards righteousness. One should have only humanity’.

Some people are so fearless that they consider Islamic acts of worship to be the only source of serving mankind and say, ‘Salah is only for teaching discipline and fast is only for developing the feeling of sympathy for the hungry and Zakah is only for helping the poor’, etc., though all these things are definitely a few Hikmats [wisdoms] out of Hikmats of Islam; but merely it is not the only purpose, but all these are amongst the basic aims of the worship such as acting upon the commandments of Allah Almighty, performing worship, remembrance of Allah Almighty in the heart, sacrificing life, money and time for the pleasure of Allah Almighty. Otherwise, there is nothing related to ‘serving mankind’ in Hajj and the acts of Hajj i.e. Ihram, Tawaf, Wuqoof (stay at) Muzdalifah and ‘Arafah, so then this should be excluded from worship. It can be summed up that ‘serving mankind’ should indeed be considered an act of worship, a blessed Sunnah and a privilege, but no one should try to destroy Islam by putting the entire religion into it. About the details of rulings in Islam, the reality is that there are some obligatory acts on which we must comply. If someone misses them, he will become a sinner no matter whether he keeps on serving mankind round the clock without sleeping; these acts are called Fard (obligatory) and Wajib (compulsory) acts such as Salah, Sawm, Hajj, Zakah, Qurbani, etc. Sunnat-ul-Muakkadah comes after these; if someone forms the habit of missing it, he will become a sinner. In comparison to them, there are some acts from which one needs to protect himself. Such acts are called Haraam and Makruh Tahreemi, for example, fornication, theft, usury, missing Salah, etc., and after them comes the category of missing Sunnat-ul-Muakkadah. Apart from the acts which must be performed or must be left there are a large number of acts which fall into the category of Mustahab acts, etc. Amongst them, if someone performs the Mustahab acts, he will get reward, but if he does not perform them, he will not be a sinner.

After this detail, I would like to say that a bondman has been commanded to perform all Fard and Wajib acts and to protect himself from all sins. He then has a choice whether to perform all Mustahab acts or perform the Mustahab act in which he takes more interest or which he likes more or which is suitable to his temperament. For example, if someone enjoys more offering Salah, he can spend his entire time offering Nafl Salah. If someone attains more pleasure by reciting the Holy Quran, he should be busy with the recitation of the Holy Quran. The one who loves Durood should keep on reciting Durood. All of these are his choice. All these ways have been narrated by blessed companions رَضِیَ اللہُ تَعَالٰی عَنْہُم and pious predecessors رَحِمَهُمُ اللّٰہُ تَعَالٰی because some would remain busy with Salah, some would remain busy with the recitation of the Holy Quran, some would recite Durood and some would keep themselves busy gaining Islamic education. In short, all these are forms of choice in Mustahab acts of worship.

The very same is for serving mankind. When a person protects himself from sins and performs regularly Fard and Wajib acts [such as he offers all Salahs, keeps the Siyam of Ramadan, pays Zakah, performs Hajj when it becomes Fard for him, protects himself from Haraam earnings, usury, bribe, etc.] and beside them performs the necessary acts of serving mankind [such as serving parents, fulfilling the rights of wife, children and relatives], and after this desires to do good to common people [such as finding someone facing a difficulty he removes his difficulty, if someone’s son wants a job, he makes efforts for him  without any greed, if he learns about a poor person, he helps him or he establishes a welfare and collects funds for it and after collecting funds he spends them on the poor, orphans, widows, the education of children and the marriages of poor girls] are great acts of reward, practice upon Quranic teachings and Sunnahs of Nabi and are one of the best deeds. The Beloved Rasool صَلَّی اللہُ تَعَالٰی عَلَیْہِ وَاٰلِہٖ وَسَلَّمَ has said, ‘Amongst people, the best is he who benefits people more.’ (Al-Mu’jam-ul-Awsat, vol. 6, pp. 58, Hadees 5787)

But in order to reduce the importance of the acts of worship, Salahs, recitation of the Holy Quran, acts of serving Masajid if someone says that ‘religion is only the name of serving mankind and those who are busy serving mankind do not need to perform other acts of worship’, it is totally wrong. Due to a lack of knowledge, such people do not understand the depth and vastness of Islam and all its aspects, and therefore fall victim to misunderstanding.