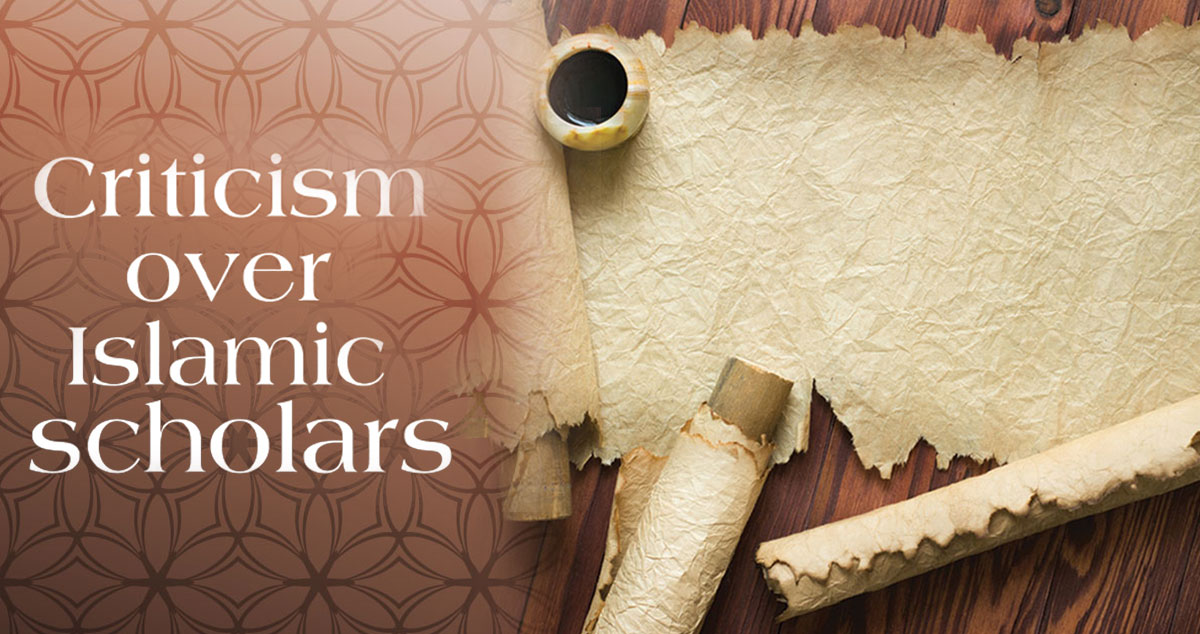 Nowadays, it is becoming a fashion to speak and write against Islamic scholars. The writer whose writings are not read or the speaker whose speeches are not heard starts objecting to Islamic scholars and Islamic rulings so that he can gain some popularity. In actual fact, this is a great misfortune. In the Holy Quran, Allah عَزَّوَجَلَّ has mentioned the glory of Islamic scholars and has raised their ranks but certain narrow-minded people want to degrade these great and glorious Islamic scholars.

One should be very careful when talking about blessed Islamic scholars. At the present time, it is a fact that many media persons in our society lack religious knowledge. Generally, they have not studied the Holy Quran, Hadees, Islamic jurisprudence and Tasawwuf etc., in a proper manner or they have read only few books or articles on the internet. If anyone with such limited and superficial knowledge passes comments about Islam, Islamic scholars and Islamic teachings, this obviously shows that he is a rash person who has no fear of Almighty Allah. Usually, by mentioning the mistakes of few Islamic scholars, they actually try to deceive people.

However, every sensible person can realize that it is unwise and unfair to criticize and condemn all Islamic scholars in the name of the mistakes of some individuals. Admittedly, there are few wrong people in every field in the world. So, let me ask, are all the people belonging to every field ridiculed like this in the world? Are efforts made to defame them in a similar manner? No, of course not. But a group of secular and liberal people who have had enough of Islam have been denouncing and degrading Islamic scholars for a long time. In actual fact, a very large number of these secular and liberal people have a very evil character. Financially backed by foreign-funded NGOs, they carry out the mission of advancing the agenda of those NGOs. In fact, speaking against Islamic scholars is also a part of this unpleasant and disgusting agenda.

Since Islamic scholars have the knowledge of Quran and Hadees, they are called “Rabbani” [رَبّانِی] i.e. they love and fear Allah عَزَّوَجَلَّ. Allah Almighty has stated:

Become the devoted bondsmen of Allah, for this reason; that, you teach the Book and you also study it.

i.e. The people who teach Quran, the Book of Allah Almighty, and promote it are Rabbani scholars. Now just ponder: Who is teaching and promoting Quran? Islamic scholars or those who have had enough of Islam? Of course, Islamic scholars. Allah Almighty has declared Islamic scholars to be His special bondmen but so-called liberal-minded people poison the minds of general public against these Divinely-declared special bondmen, inciting hatred against them. One should ponder over the fact as to what kind of people these liberals are and who they follow. They should seriously think about it lest they become the bondmen of Satan as a result of speaking against the bondmen of Rahman. In Surah Al-Ma`idah, part 6, Allah Almighty has stated:

Undoubtedly, We sent down the Tawrat, in which is guidance and light. According to it, Our obedient Prophets, and the men of knowledge and the (religious) jurists were commanding to the Jews that, they were required to protect the book of Allah, and they were witnesses to it.

The glory of Islamic scholars is clear from every word of these blessed Ayahs.

2     It has been stated that the responsibility of protecting the Book of Allah عَزَّوَجَلَّ has been assigned to Islamic scholars.

3     It has been stated that blessed Islamic scholars are the witnesses of the truthfulness of the Book of Allah عَزَّوَجَلَّ. When we read these attributes carefully, it becomes clear to us that even today these attributes are found in blessed Islamic scholars. They learn and teach the Holy Quran, Hadees and Shar’i rulings, explaining and conveying them to people. They are surely Rabbani Islamic scholars. On the other hand, there is a group of secular people that does not like to listen to these things even if quoted from the Holy Quran. There is another group which appears to be a bit religious, but, in actual fact, it defames Islamic scholars like the first group or even more than them. On such occasions, they say that it is the virtue or attribute of the past Islamic scholars and it does not apply to the present Islamic scholars. I feel very sad about their grey matter. They remain lost in the thought of the past, unaware of the present and disappointed with the future. اَلْحَمْدُلِلّٰہِ, even today, hundreds of thousands of blessed Islamic scholars are teaching and explaining the Holy Quran and blessed Ahadees, writing commentaries, religious books, guiding people about Islam and carrying out research on Shar’i rulings. By virtue of their efforts, Islam is being spread in the world, non-Muslims are embracing Islam and Masajid are being frequented. Tell me, if there were no Islamic scholars, then who would be preaching Islam and promoting Quran and Sunnah?

Many media persons discuss and debate over different issues for many hours on electronic media and there are many columnists who write articles, etc., on a regular basis. There are also a considerable number of novelists, dramatist, poets and other literary figures. They all should make it clear as to how much part of their life has been spent, rendering services to Quran and Hadees! Everyone knows the reality, but unfortunately, certain people only confuse the nation and condemn the Islamic scholars who have devoted their entire lives to mentioning Allah Almighty and His Beloved Rasool  صَلَّی اللہُ تَعَالٰی عَلَیْہِ وَاٰلِہٖ وَسَلَّمَ .

These concerns apply to people from all walks of life. Simply because they have been elected to positions of responsibility